One of the most commonly used analogies for life is a journey.  It makes a lot of sense, really.  We’re traveling from this life to the next, with a bunch of pit stops and flat tires along the way.  Anyone who takes road trips at all knows that there are a few extremely important things you need to bring for the long ride ahead.  Among these items are food, caffeine, entertainment for young passengers, and most importantly, a map.  Without food everyone is going to starve sooner or later.  caffeine will keep you awake, entertainment will keep the kids from screaming, and a map will keep you on the right path.  On the spiritual journey, I like to think of food as prayer.  Without prayer, sooner or later you’re gonna drift away into lukewarmness or even disbelief.  Caffeine is like the Holy Eucharist.  It charges you up for those long days when you feel like you got run over by a truck.

I know personally, books are among my favorite types of entertainment.  I think on the spiritual road trip, it’s the same thing.  Books about spirituality or apologetics will teach you not how to be entertained, but how to be engaged with the faith.  And lastly, a map.  Don’t you hate it when you tell Siri you want to go somewhere, and by the time she says “you have arrived”, you’re like ten miles away from the place you wanted to be?  It’s because she didn’t know the way to get there and acted like she did.  I know I do that a lot.  During my Freshman year I was in Marching Band.  I barely knew how to play my instrument, so sometimes I would move my hands randomly to make it look like I was actually playing the music.  Since no one knew I had a problem, no one helped me fix it, so I needed up as an alternate pushing stuff around instead of actually marching with my saxophone.  The same thing can happen in any other circumstance.  Anyway, you have to know the way to get where you’re going if you ever want to get there.  And if you ever want to get there, you’re gonna have to leave where you’re at.

So, we need to find a way to get there, but here’s the catch.  Our goal is to get to Heaven, right?  To be with God in eternal joy.  Here’s what Jesus said about that.

“Jesus said to him, “I am the way, and the truth, and the life. No one comes to the Father except through me.”

It seems pretty clear to me that all the other roads that have the green signs saying “Heaven, 10 miles” are fake.  So, we know what to bring, we know where we’re going, and we know the way to get there, what else?  Getting on the way and saying on it. If Heaven is a castle, Jesus is the drawbridge, and we need to figure out how to get to Him.  Remember what I said earlier about a map?  I never really explained what that was, did I?  Well, the map is the Church.  Not the Siri map that always messes up, or a conventional map.  It’s like Google Maps, (For me at least) it’s always spot on.  It tells me where the way is and how to get there, and where all the Sonic Drive-Ins are along the way.  It also tells you what exit to take, when not to take one.  You also need to make sure you have the right “Maps” app.  The world will try to give you false maps and fake paths, like Siri.  You need to find the real one.  How do you do that?  Well, in the description of the real map, it has four marks, kind of like a tag on WordPress.  The marks on the actual map are One, Holy, Catholic, and Apostolic.  Sound familiar?

Does anyone own an absolutely perfect car?  Does it have the top speed of a Bugatti, the efficiency of a Mazda and the looks of a Lamborghini?  No?  Okay, so none of our cars are perfect.  Eventually they’re going to run out of gas or get a flat tire.  That’s when we make a pit stop at the gas station.  Same thing with us humans.  Since we’re not perfect, eventually we’re going to sin and we need to go to Confession to fix ourselves up.  God doesn’t care about how many times you run out of gas or even get in a wreck.  He cares about how many times you go to fix it and keep on driving,  Since none of us are perfect, Confession is a must on the road trip to Heaven.

There is one last thing I haven’t told you yet about they way.  The more people you caravan with along the way, the harder it is to get lost.  Of course they can’t be drunks or kids without a license, they have to want to get to your destination.  If you caravan with someone else who doesn’t want to get to Heaven, it’s going to be much harder for you to arrive at the correct destination.  But, like I already said, the more people you caravan with that have the same goal, the likes are the trip will be much easier.

Now that you know the way, it’s time to get going.  Like J.R.R. Tolkien once said,

“It’s the job that’s never started that takes the longest to finish.”

And here is one last bit of advice: 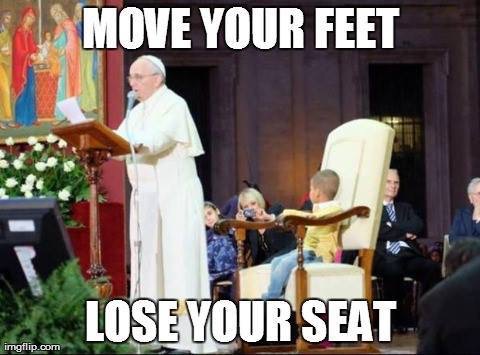 That’s it for today.  God Bless!

Almost every Christian knows the story of Pentecost.  The Apostles were hiding in the Upper Room (The Same one where the Last Supper took place) for fear of the Romans.  The Holy Spirit appeared as tongues of fire over their heads and the 11 went out and preached the Gospel.

Pentecost is widely known as the birthday of the Church, the day when the Apostles received the Holy Spirit and were ready to give the Good News to the world.  This is officially what happened according to the RSVC:

1 When the day of Pentecost had come, they were all together in one place. 2 And suddenly a sound came from heaven like the rush of a mighty wind, and it filled all the house where they were sitting. 3 And there appeared to them tongues as of fire, distributed and resting on each one of them. 4 And they were all filled with the Holy Spirit and began to speak in other tongues, as the Spirit gave them utterance.

5 Now there were dwelling in Jerusalem Jews, devout men from every nation under heaven. 6 And at this sound the multitude came together, and they were bewildered, because each one heard them speaking in his own language. 7 And they were amazed and wondered, saying, “Are not all these who are speaking Galileans? 8 And how is it that we hear, each of us in his own native language? 9 Parthians and Medes and Elamites and residents of Mesopotamia, Judea and Cappadocia, Pontus and Asia, 10 Phrygia and Pamphylia, Egypt and the parts of Libya belonging to Cyrene, and visitors from Rome, both Jews and proselytes, 11 Cretans and Arabians, we hear them telling in our own tongues the mighty works of God.” 12 And all were amazed and perplexed, saying to one another, “What does this mean?” 13 But others mocking said, “They are filled with new wine.”

14 But Peter, standing with the eleven, lifted up his voice and addressed them, “Men of Judea and all who dwell in Jerusalem, let this be known to you, and give ear to my words. 15 For these men are not drunk, as you suppose, since it is only the third hour of the day; 16 but this is what was spoken by the prophet Joel:

Peter goes on to give an amazing speech and converts 3,000 people on the spot.  I’m gonna try to not give the cliché talk about Pentecost that you here every year, so I’ll begin to head in a slightly different direction. END_OF_DOCUMENT_TOKEN_TO_BE_REPLACED

This Blog is Powered By